Okay, so I planned to blog daily news and reviews from the Worldwide Festival while in Sète, but I just didn't manage to. Sometimes, you just need to get some sleep; or the beach and the beats lure you out into the sun. Whatever, I'll try to sum everything up nicely in the next few paragraphs - you can read up on Day 1 here. 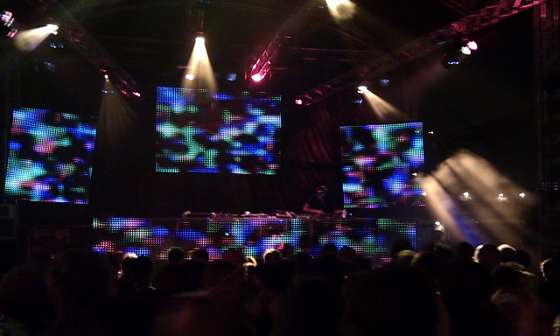 Friday started with a yummy breakfast and then the sunny beach. We had a jolly good time in the refreshing water while relaxed beats rolled over us into the Mediterranean sea. Later, at the Théâtre de la Mer, Roberto Fonseca kicked it off with his fantastic Havana Cultura band, which was a really, really great performance. At sunset, L'Orchestre Poly-Rhytmo de Cotonou came on stage with their ingenious interpretation of afrobeat, and that's when the dancing started for good. The Théâtre is such a beautiful location, and the bands knew how to take advantage of it. As the end of their performances drew near, a little bit of rain sprinkled over Sète, but it stopped as suddenly as it began. Later, at the lighthouse, Theophilus London and the wild and crazy Gonjasufi & The Gaslamp Killer, well, killed it, big time.

After Gil Scott-Heron had disappointed us on Thursday by not showing up (though he played Montreux - for whatever reason), I found it equally sad to learn that Flying Lotus and Joy Orbison cancelled their respective gigs, too. FlyLo was one of the appearances I longed for the most - and to replace him with Laurent Garnier left me frustrated. Don't get me wrong, he's a great DJ and he rocked the crowed twice this year and also in 2009, but he's just not my cup of tea. Last year's gig didn't touch me, and this time ... well, solid, but I hoped for some cut up quirky beats and all I got was (more or less) four to the floor. Yeah, even if I enjoyed his playing of Song 2 or David Bowie in a certain kind of way: Eurythmics and some of the other 80s stuff was pretty much over the top. I went home after a couple of minutes and missed Sbtrkt feat Sampha. Bummer.

It took a strong cup of coffee on Saturday to forget about the disappointment and focus on what lay before us: Tropical sweetness from Hugo Mendez and the fantastic show of the Ladybugz at the beach. They really, really got me back into the groove. As did the delicious entrecôte I was having before heading towards the Théâtre once again. The Hypnotic Brass Ensemble rocked the house from the first note, super tight brass sound from Chicago. We met some of the eight brothers in the hotel later on where they stocked up on their booze supply

However, the best was yet to come: Quantic and his Combo Bárbaro featuring the amazing singer Nidia Góngora Bonilla! I've always been and always will be a huge fan of Will Holland's musical ventures, and this one is simply exceptional. Un Canto A Mi Tierra is my personal anthem of this year's Worldwide Festival.

At the Phare du Môle, Kyle Hall held the spirits way up. Hard to believe that he's still so young and yet so talented, but it's true! The dOP, on the other hand, were about the craziest guys at the whole festival. They definitely know how to party, and they're not ones to play games with. If you've been there, you know what I'm talking about! Very much later, Josh Wink released me into the pleasantly warm night and a cool hotel room (thanks to the AC).

And Sunday? Sunday is all about the beach, and this time Sunday was also about the World Cup final, of course. But more of that later. Sadly, Kevin Beadle and Ross Allen didn't show up because their no-frills flight was cancelled. But the beach is always the beach: sun, water, music, and lots of happy people. What more can you expect? Lots more! Even if I missed Jeremy Ellis's reportedly excellent set because I had to be back to the hotel for a short while. However, when I stepped out of the hotel again, I could hear a sweet song coming all the way from the beach. I instantly recognized it: 54-46 by Toots And The Maytals. And I knew it could be none other as the mighty Norman Jay on the decks. His selection escorted me all the way back to the party and into happiness.

But wait, what about Holland vs. Spain? Didn't Gilles promise to show us the match on a "big, but not that big" screen. The screen was there, but it remained pitch black. Until Gilles and The BPM managed to start a live stream on Lefto's Macbook and connect the darn thing to the screen. The rest is historia. And the party went on until almost 5 a.m. with Gilles, Norman Jay, and Laurent Garnier back-to-back-ing for hours and spinning loads of heavy classics. While the whole beach went nuts.

This is how the Worldwide Festival 2010 will be remembered. Or this is at least how close I can get to describing it. If you want more, take a look at some pictures I've taken, and check the official videos on YouTube (unfortunately, most of them are blocked at least here in Germany due to the annoying copyright restrictions). If all this sounds good to your ears: Come join the party in 2011!